Get fresh music recommendations delivered to your inbox every Friday.
We've updated our Terms of Use. You can review the changes here.

by That Harp Guy 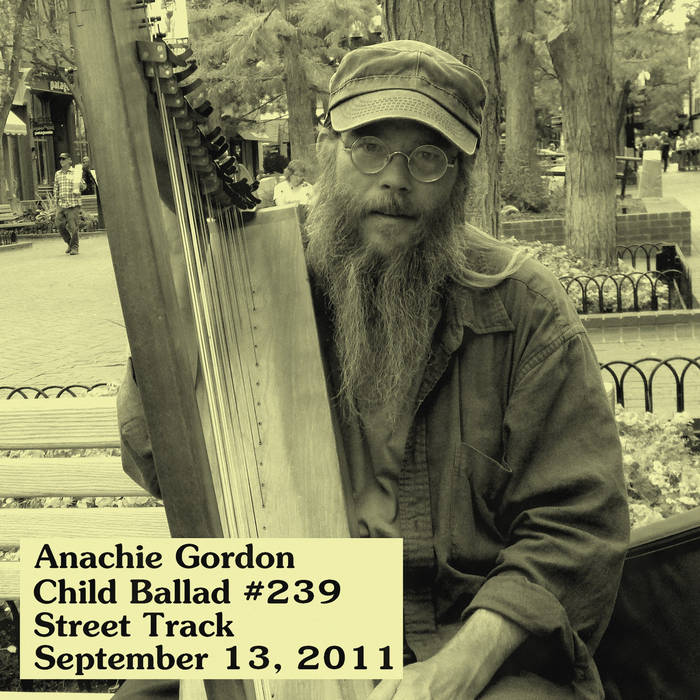 One of my favorite long, sad ballads. I'm asking a bit more, 'cause it's long, and a lot of fun, and a lot of work. In particular, Jeannie offers us the line, "To a son or a daughter, I'll never bow my knee!" - which is to underline that she is a Commoner, and Lord Sultan a Noble, and she would be required to defer and submit to the whims of her children - her 3-year-old could call for her execution, for instance, and she's just not there - she's a few hundred years ahead of her time, and a true fighter for personal freedom.

I keep items like Anachie Gordon in my repertoire because they show us that as ungroovy as some of the things going on in the world around us are, we as a species come successfully out of far ungroovier times. If *nothing* else, personal hygiene and marital customs have improved dramatically since 1600.

Harking is bonnie, and there lives my love
My love lies on him and cannot remove
It cannot remove, not for all that I have done
And I never will forget my love Anachie

Come to bed my Jeannie, my honey and my sweet
To style you my mistress it would be complete

And down came her father - he's spoken with reknown
Saying, You who are her maidens, come loosen up her gowns

Harking is bonnie, and there lives my love
My love lies on him and cannot remove
It cannot remove, not for all that I have done
And I never will forget my love Anachie...

released September 13, 2011
This was recorded live on the Pearl Street Mall, in Boulder, Colorado.

Gaffer has been played by his Folk Harp, Leannan (a Dusty Strings 26-string), since 1989. Multi-instrumental in his background, he has always had music as part of his life. He currently resides in El Paso.

Here, you are encouraged to listen; it's absolutely free. If you like it and want to download it, consider giving me what you think it's worth to you. Thank you. ... more

Bandcamp Daily  your guide to the world of Bandcamp

The Hammer and The Relentless from the Boston band Malleus stop by for a chat.